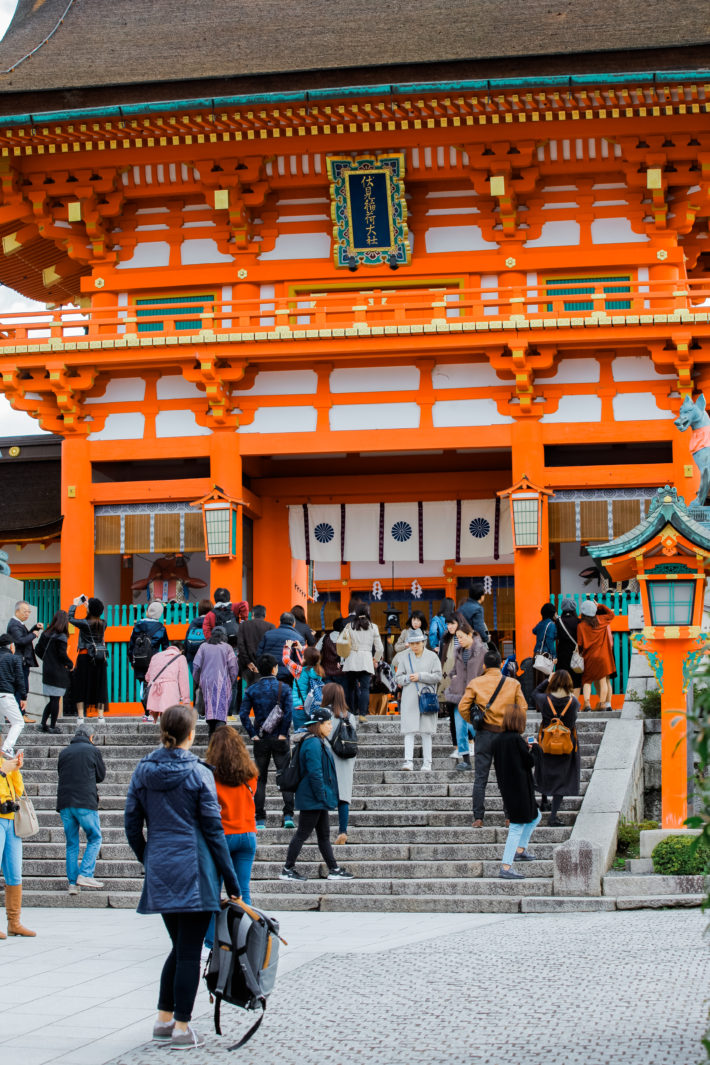 Japan has always been high on my bucket list.  and when the chance to head there for a jaunt this november presented itself, my best friend Lynze and i jumped at it.  let me tell you, Japan is everything and more than you’ve ever dreamed of!  i’m going to try and break down my trip into three parts with a few highlights from each section of our trip.

my friend Lynze and i travel really well together, with a lot of spontaneity but also a lot of going-with-the-flow.  typically what happens is there is something Lynze really wants to do/see and something else that i really want to do/see, as well as things that we both want to do.  we sit down and chat about what are the absolute must-sees for each of us and put those high on the list and go from there.  i love having an idea of a few places we are both really interested in seeing, but we are both pretty realistic about fitting everything in and don’t stress if we don’t get to everything on the list.  there is SO much to do in a country like Japan that it’s hard to make it all work so we are pretty easy going about enjoying the ride. 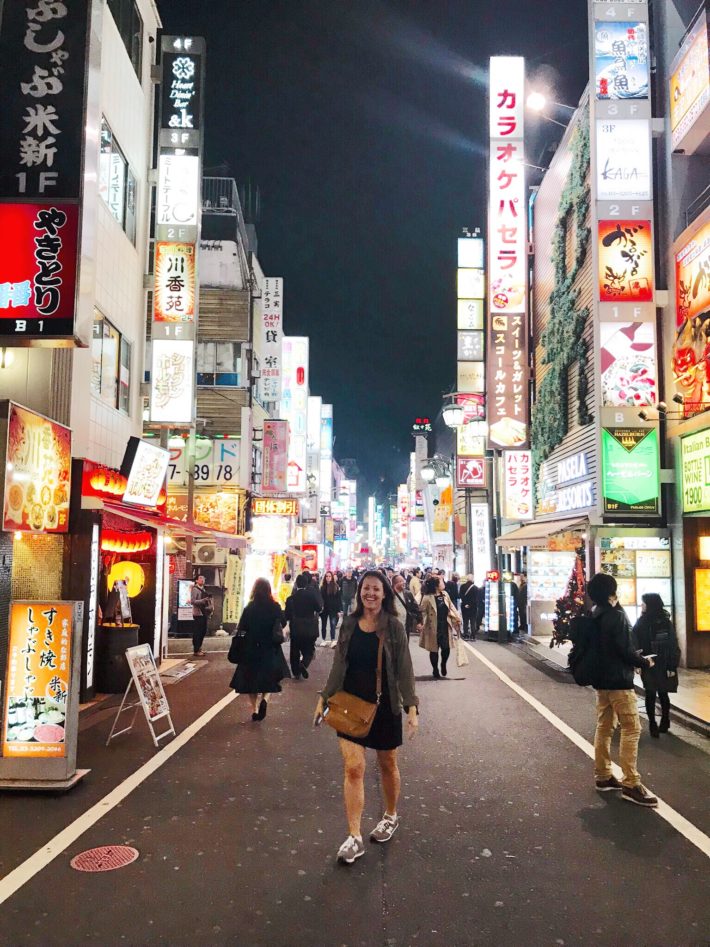 our first stop, tokyo.
i picked one of the neighborhoods that had been suggested to me and chose a hotel that was priced well on booking.com as our meeting place.  we stayed at Candeo Hotels Tokyo in the neighborhood of Roppongi.  a new hotel that was perfect for our few nights in tokyo.  to be honest we didn’t spend much time here but i would recommend it for it’s location, helpful staff, and nice accommodations.  the area is centrally located and the hotel was in walking distance to the subway – which is an entire world in itself in tokyo!

our first night we found an old sushi restaurant where we couldn’t read the menu and just pointed to what we thought looked yummy.  the Japanese are incredibly hospitable and took care of us at every meal.  a man next to me kindly ordered us sea urchin and knowing it would be extremely rude to turn it away (ugh, scary sea creature!), i swallowed it whole like a true world traveling champ as he watched us intently take it down the hatch.  rule of thumb when visiting japan:  always eat what they serve you.  i feared i may barf at the table after downing it and really screw up my chances of being seen as respectful, but it tasted way better than i thought.  i mean, i could do without it ever again and be okay, but at least my gag reflexes didn’t show their true colors.

Tsukiji Fish Market Tuna Auction
because of the jet lag, we went to bed early with the hopes of rising at 2:45am to catch the world famous Tsukiji Fish Market Tuna Auction!  we scheduled a cab the night before with our front desk because the subways don’t run that early in the morning.  for whatever reason, the fish auction was randomly closed that day so that was a huge damper in our plans.  we learned later about this website which shows you the days it will be randomly closed – make sure to check it if you plan on going.  such a rookie mistake! 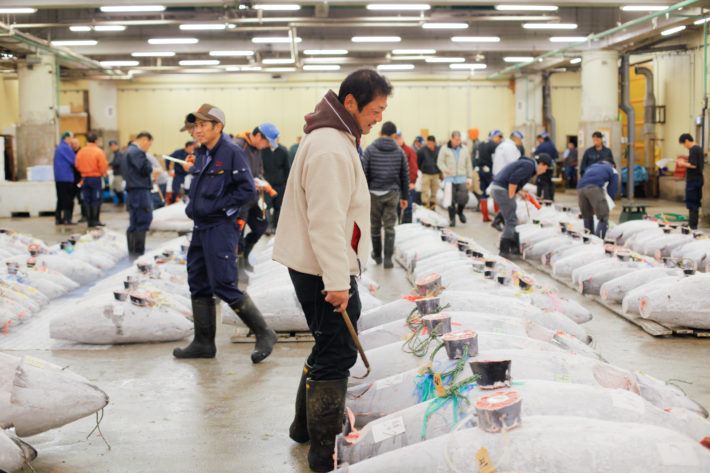 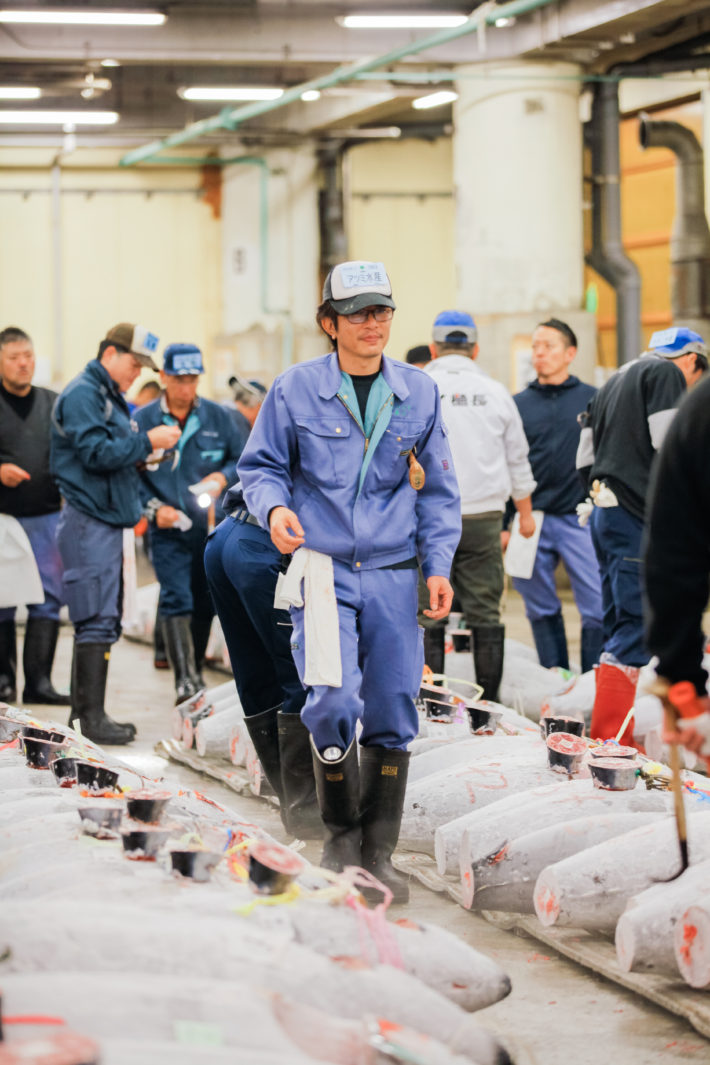 don’t worry, jet lag lasts for a few days so we did it all over again the next day arriving around 3:00am.  we honestly should have been there earlier because we were the last two people in the first group to get a vest.  people line up starting at 2:00am, or sometimes earlier, as it’s a first-come first-serve system.  once you get a vest, you are golden.  each day the fish market allows 2 groups of 60 people in to watch the auction, and they are very strict so be on your best behavior.  we then waited with our group of about 60 other people until 5:00am, when the Fish Auction opens for the day.  once it opened, we were put into a single file line, and DO NOT get out of a line in Japan!  the police will throw you right back in!  it really is for your safety as there are hundreds of trucks zipping and flying by at the market.  the auction was quick but so exciting!  after the auction, we had a big fat sushi breakfast at one of the sushi restaurants inside the inner market and it was hands down the best tuna i’ve ever eaten. 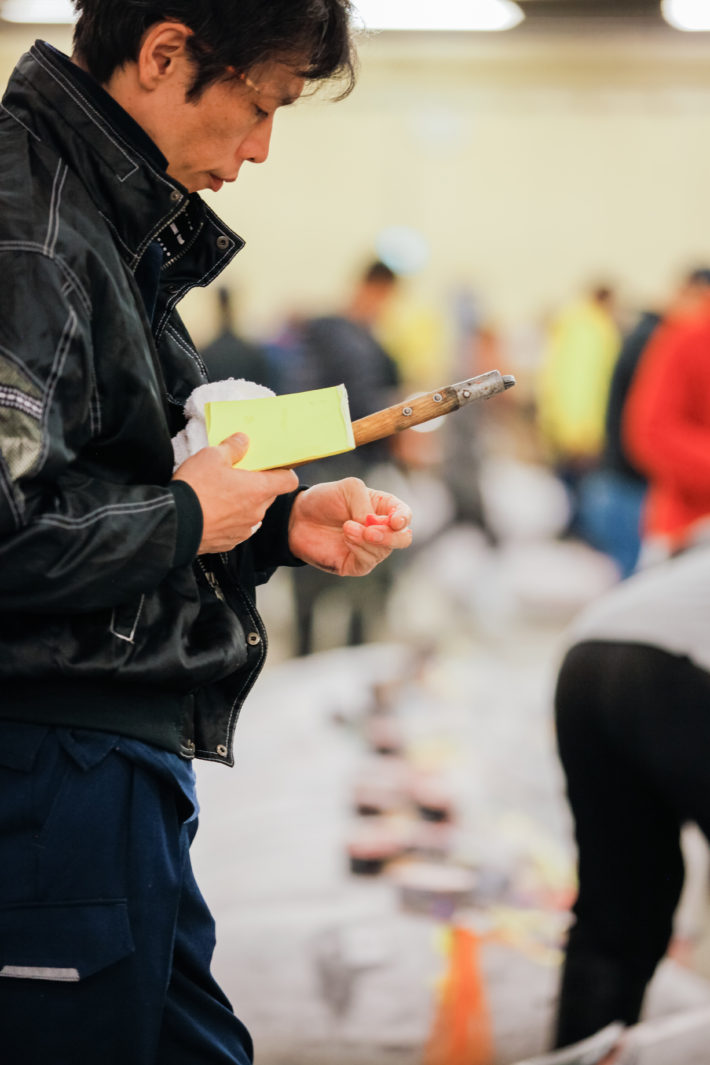 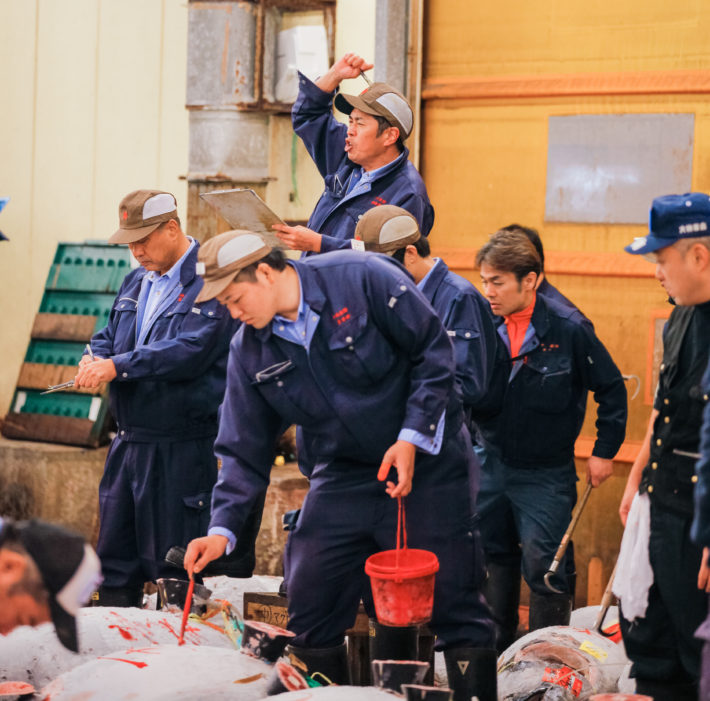 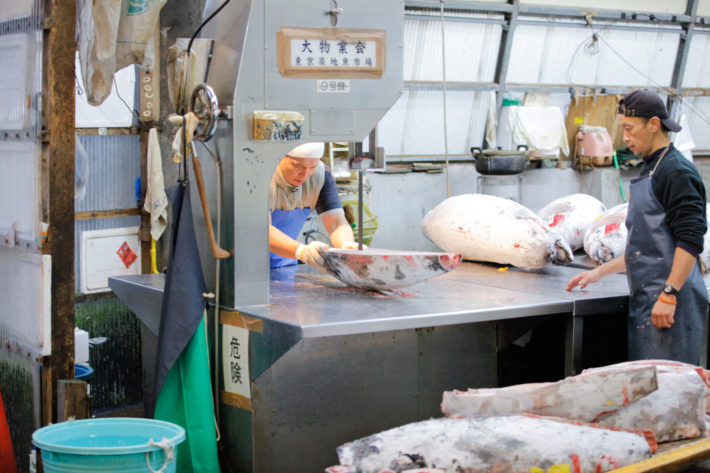 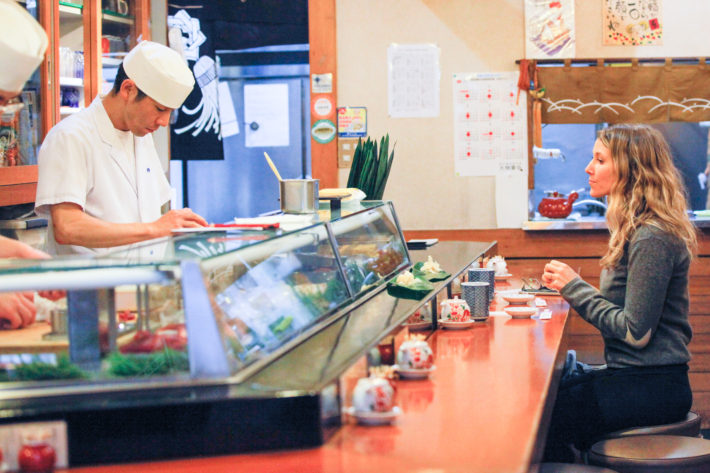 Fun Facts about the Auction
– this auction has been going on since the 1600’s and is the largest fish auction in the world
– every day around 1000 tuna are auctioned – thats 4 different species.  bluefin tuna is the most sought after
– the auction is quick but serious and starts promptly at 5:30am with 700 bidders per day
– each tuna is carefully inspected:  shape, color, size, and fat content are all important for pricing.  the inspectors cut a tiny piece of meat off to carefully look at the color, smell it, and feel the fat texture . they use flashlights for light inspection.  bright red = the best tuna!
– the tuna is divided into three separate parts with the upper part of the belly being the most expensive
– it is then shipped all over the world!
– there are plans to move the auction in the near future to a new site 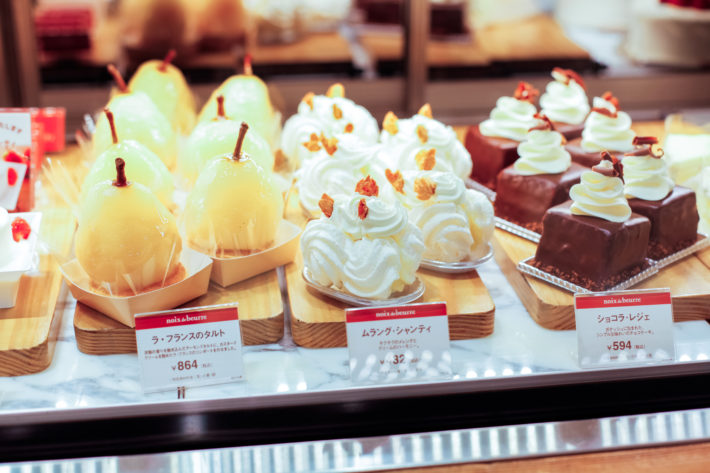 Isetan Shinjuku
the craziest part of Tokyo to me is everything that’s happening below ground.  the subways are insanely organized and precisely on time, with some of the best restaurants in Tokyo in the subway stations.  everyone is always hustling and bustling, constantly all day (where is everyone going mid day?) so there is amazing food everywhere.  when we got off at the Shinjuku station, we stumbled upon Foodie Heaven…Isetan.  imagine the nicest Saks or Neiman’s in the U.S., but every counter was filled with gorgeous foods  someone eager to wait on you at literally every counter and corner you turn.  it’s located in the basement of this department store and there are sections for everything – desserts, noodles, fish, meats, fruits, etc. making it made it really easy to get lost in this food paradise. 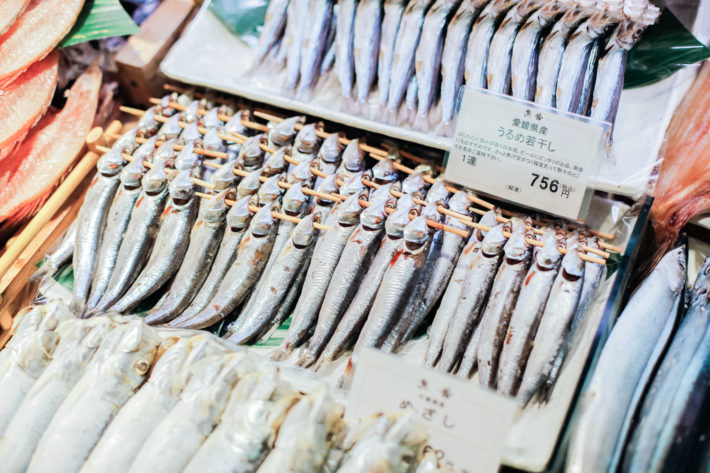 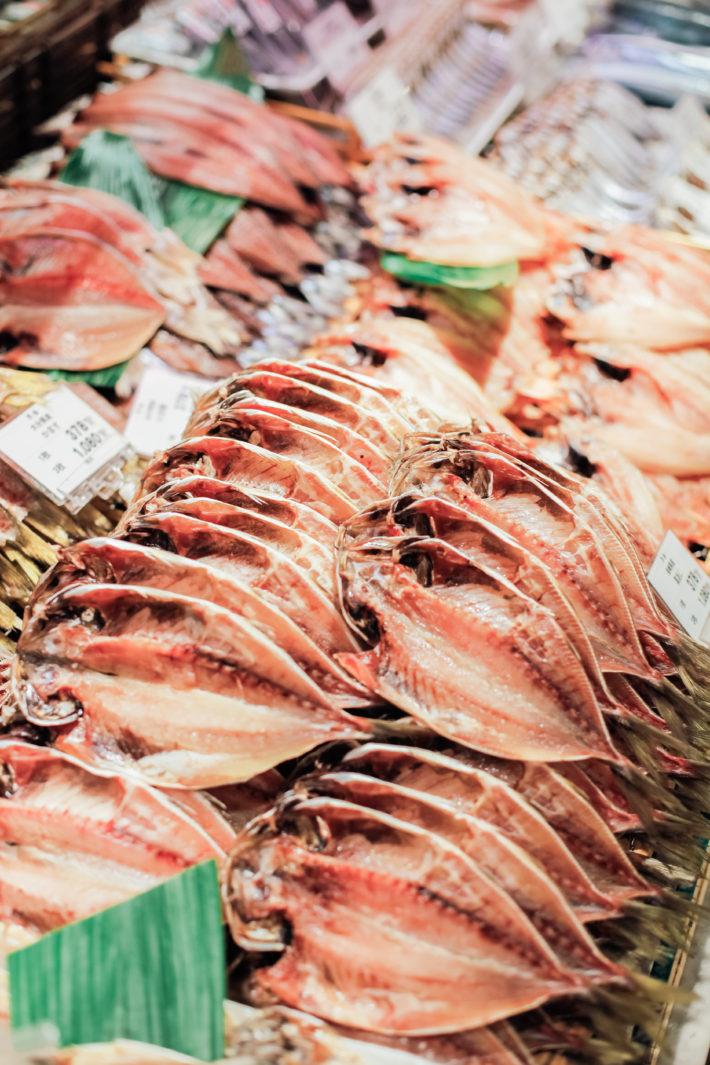 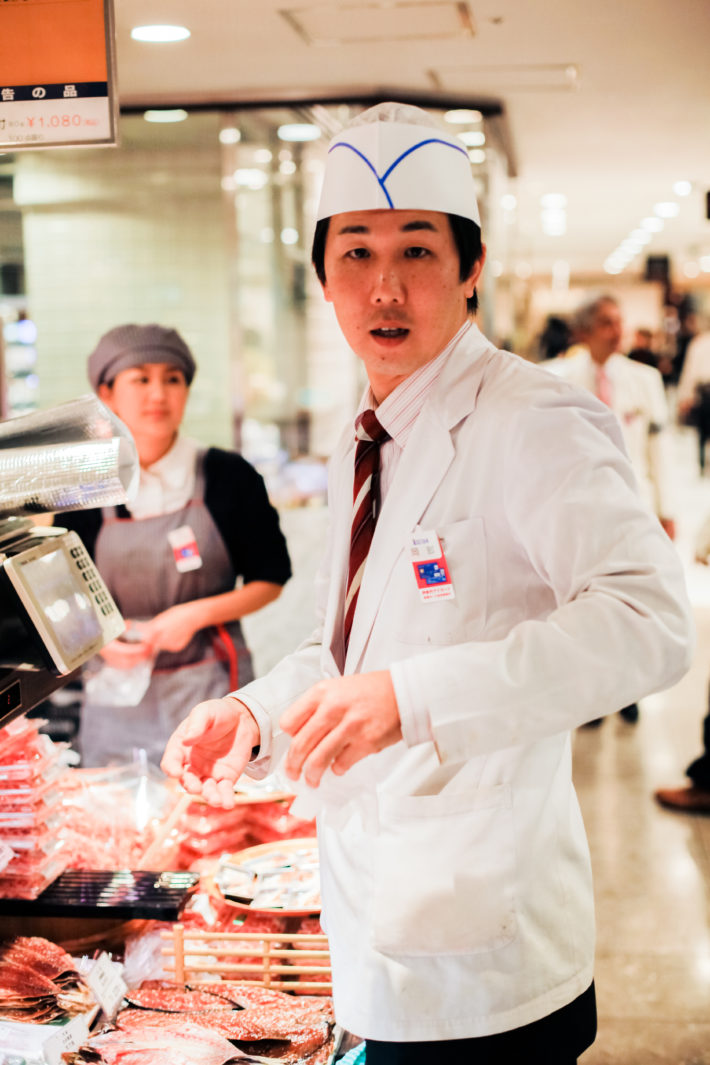 Robot Restaurant & Golden Gai
we were in tokyo and we wanted to get weird.  the Robot Restaurant was recommended to us and since the Japanese know their technology, we decided to go.  if you have epilepsy or can’t do well with millions of bright lights, this is not for you.  it was a little much for me but a hilariously unique experience.  to calm our overly stimulated eyes we ventured into Golden Gai just blocks from the main lights of Shinjuku.  if you’ve watch Anthony Bourdain you’ve seen this area – it’s a very teeny and tightly packed area with narrow alleyways of bars on bars on bars.  each shanty bar is the size of a closet and can only hold a few people at a time.  although small, they were extremely intimidating for foreigners.  walking around at night felt like we walked back into Tokyo history, and i love stuff like that. 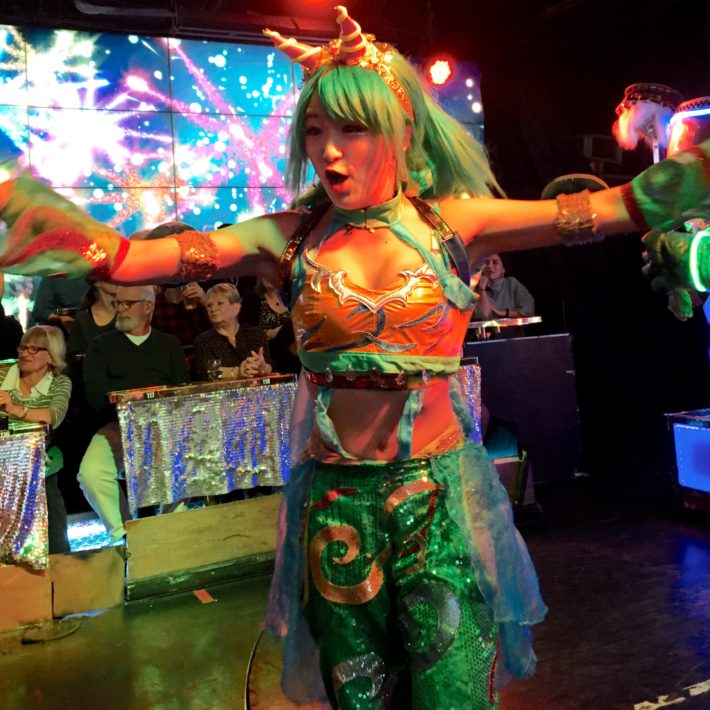 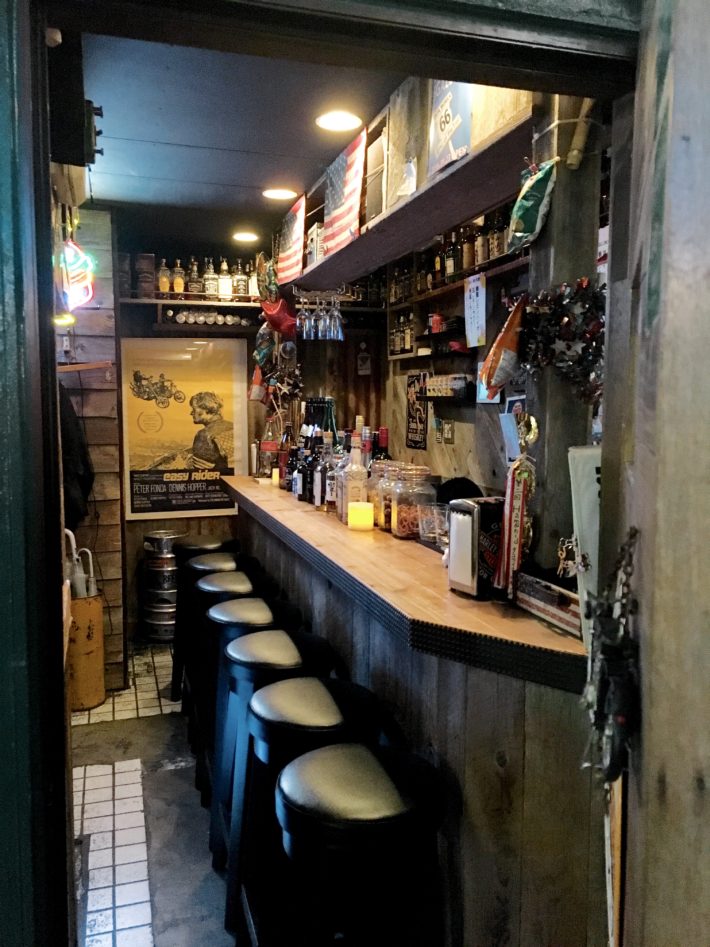 Tokyo is filled with rich history, culture, and the best food in the entire world.  the shopping is fun but you could spend weeks there just eating!  Stay tuned for my next part of our trip….